India (Ep.1).Getting ready for the trip and first impression

India (Ep.1).Getting ready for the trip and first impression

This summer when I received the invite to travel to India I was very happy because I didn’t had the chance to explore other places outside Europe before.

So, after I received the itinerary, I started to search for more details about the region where we spent most of the time: Jammu and Kashmir. And because I did not find that many information as I would have wanted, I kept a journal that I could share with you at the right time.

But first, let me tell you what I have knew from various sources, including friends that traveled previously in India and my experience on getting ready for the trip:

I heard that except Kerala, India will have a high cultural impact on me. Even more, I was told that usually, after the first trip in India, you either love it or hate it.

How would I describe it? Fascinating, colored, loud in the big cities and unexpected.

I was told that if I travel outside Kerala [which is in the south of India], in the rest of the country the food is too spicy and I might not like it. I enjoy the food everywhere I go, so for me this was an important topic, this is why it’s on top of the list 🙂

Actually the food wasn’t that spicy as I would have expected (note: I don’t eat very spicy food).

Meanwhile, I had to arrange a few details for the trip:

I chose the e-visa which is a very good option if you previously read carefully the instructions. I received the visa in less than 24 hours. For another friend that traveled with me it took a little bit longer, about 3 days, so it can vary.

Based on the pre-approval, you will receive your visa upon arrival in the airport.

You can find more details about the e-visa here.

When you travel in countries with high risks of diseases you’d better take all the precautions.

Depending on the region you are traveling to in India and your personal medical history, your doctor can recommend the best vaccines for you.

Don’t forget about the travel medical insurance as well.

Flights
Prices from the big airports in Europe to Delhi for a round-trip start around 500 de EUR if you buy them in advance.
Interesting to know is that some companies have a better flight schedule than others. For example, Emirates, Qatar, Air India usually land in Delhi during the day and they have flights that take off around 10-11 in the morning. Others like Turkish Airlines, KLM/Air France, Aeroflot land in Delhi late in the evening/night and take off during the night or very early in the morning.
If you are interested rather in the shortest flight, Qatar has flights from Bucharest for example (with only 1 stop) with a duration of 10-11 hours.

Roaming
I knew I had to pay attention to the roaming rates as India is included in the 5th zone [Dubai, Cuba, Japan are also in the same zone]. My roaming is active all the time so I called my provider, Orange, to ask what my options are in this case. After talking with the Call-Center Operator who searched thoroughly in 3 different roaming offers, we both concluded that for India the best thing to do is to switch off your mobile data.
Just as a reference, phone calls to Romania costs around 2,6 EUR/minute and internet traffic 13 EUR/minute. So, if you have a good Wi-Fi connection at your hotel, use it as much as possible.

Sockets
Asking my friends that traveled in India about what sockets do they use I found out that some are similar to the ones with 3 pins like in UK. And because I am always very cautious I bought a set with 4 different socket adapters that can save you wherever you are on the globe. There were hotels where I did not need an adapter, but there were also hotels where I used my UK socket adapter.

I heard it’s a crazy traffic. It’s true that especially in Delhi it’s a quite a hustle. I noticed that they have the talent to pass one next to the other one very close. It’s fascinating to watch them at a tangled and overcrowded crossroad. And still everything seems so natural and in its place. They seem to know what they are doing in their daily chaos. And for sure you will spend a lot of time in traffic. But otherwise, for me, who I drive daily in Bucharest it did not seem so complicated. Yes, there are lots of cars, rickshaws and other means of transportation. But if I think Bucharest is on the 5th place in the world in terms of traffic according to the traffic index by Tom Tom], Delhi wasn’t as bad as I thought it would be. When you have a not so low comparison, your perspective can be different than the one of the most of the people. [This is my opinion. For somebody who’s living in a small town the impact can be much greater.]

So I was mentioning Delhi as my trip in India started from here.

The previous day before I was leaving Romania I was planning to have a free day just for packing and time to rest. But as you know some things cannot be planned, in the end I did not get the chance to sleep at all. Therefore, when I landed in Delhi, I haven’t slept for 48 hours except 2-3 hours of sleep in the plane. And because we landed around 4 AM, I managed to sleep 2 more hours at the hotel. Afterwards we explored the city. No matter how tired I was, I wouldn’t wanted to miss the tour that was already scheduled for us, the guests that arrived earlier.

We stopped at Jama Masjid, meaning the biggest mosque in Delhi.

Then the group split in 2: some took the rickshaw, and I with a friend who is a photographer decided to walk around the bazaar and taste some of the street food.

I have read that it’s quite risky to eat street food for us [European people] that are not used with some germs, but I wanted to try the food anyway in small quantities and I had no problem. 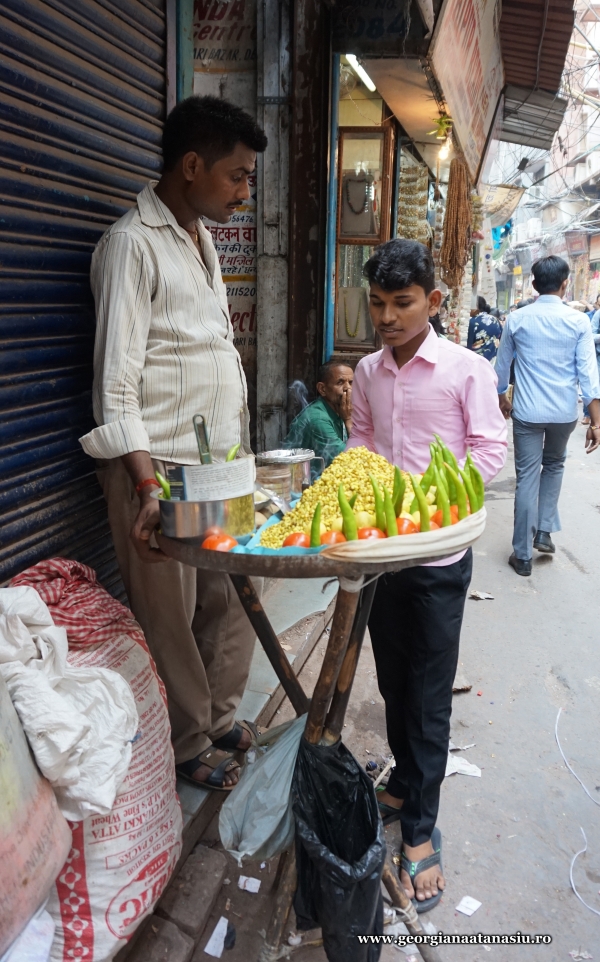 When coming back to the car I met a group that was dancing and partying.

At first, the driver told me that probably it was a wedding, but afterwards he realized that they were taking Ganesh’s statue to the closest river for a ceremony that brings luck to the whole family.

Because I was getting very close to the group to record all this, they invited me to dance and I realized only afterwards that I was very colorful on my hands. The driver told me that this will bring me luck 🙂

Then we asked the driver to take us to a good restaurant, that kind of restaurant that he would eat if he were hungry and not a very touristic one.

In the end we thank him because besides the super tasty food, we were the only tourists in the restaurant 🙂

This is another story that started the moment we landed and I found out that I would not have mobile phone signal until we return to Delhi (because the region is close to the border the phone signal is being jammed). In return we had good access to Wi-Fi which compensated for the lack of mobile signal.

* This was a sponsored trip by Goamit Adventures.

This website uses cookies to improve your experience while you navigate through the website. Out of these, the cookies that are categorized as necessary are stored on your browser as they are essential for the working of basic functionalities of the website. We also use third-party cookies that help us analyze and understand how you use this website. These cookies will be stored in your browser only with your consent. You also have the option to opt-out of these cookies. But opting out of some of these cookies may affect your browsing experience.
Necessary Always Enabled

Any cookies that may not be particularly necessary for the website to function and is used specifically to collect user personal data via analytics, ads, other embedded contents are termed as non-necessary cookies. It is mandatory to procure user consent prior to running these cookies on your website.